Conventional panels have been around ever since electronics became small enough to make them viable. Conventional panels are used less frequently in large buildings than in the past, but are not uncommon on smaller projects such as small schools, stores, restaurants, and apartments.

A conventional Fire Alarm Control Panel employs one or more circuits, connected to sensors (initiating devices) wired in parallel. These sensors are devised to dramatically decrease the circuit resistance when the environmental influence on any sensor exceeds a predetermined threshold. In a conventional fire alarm system, the information density is limited to the number of such circuits used.

To facilitate location and control of fire within a building, the structure is subdivided into definite areas or zones. Floors of a multistory building are one type of zone boundary.

An Initiating Device Circuit connected to multiple devices within the same ‘zone’ of protection, effectively provides 2 bits of information about the zone corollary to the state of the circuit; normal, or off normal and alarm or quiescent. The state of each Initiating Device Circuit within a zone displays at the Fire Alarm Control Panel using visible indications called Annunciators.

These Annunciators may employ a graphical representation of the Zone boundaries on a floor plan (Zone map) using textual descriptions, illuminated icons, illuminated sections, or illuminated points on the map corresponding to Initiating Circuits connected to the Fire Alarm Control Panel.

For this reason, slang often inaccurately refers to initiating circuits of a Fire Alarm Control Panel as Zones.

Larger systems and increasing demand for finer diagnostic detail beyond broad area location and control functions expanded the control by Zone strategy of conventional systems by providing multiple initiating circuits within a common Zone, each exclusively connected to a particular type of initiating device, or group of devices. This arrangement forms a device type by Zone matrix whose information is particularly suited to the Tabular Annunciator In multistory buildings employing a Tabular Annunciator for Example; rows of indicators define the floors horizontally in their stacked relationship and the type of device installed on that floor displays as columns of indicators vertically aligned through each floor. The intersection of the floor and device indicators provides the combined information. The density of information however remains a function of the number of circuits employed.

Even larger systems and demands for finer diagnostic and location detail led to the introduction of addressable fire alarm systems with each addressable device providing specific information about its state while sharing a common communication circuit. Annunciation and location strategies for the most part remain relatively unchanged. 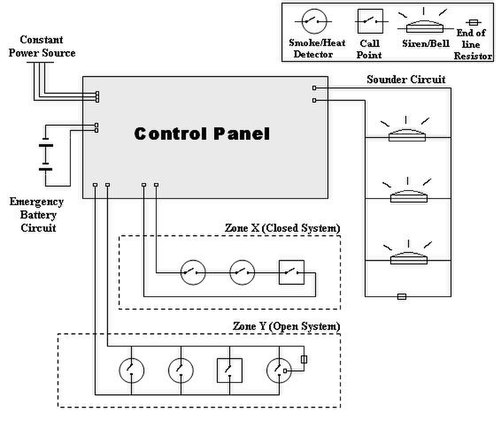 A wiring diagram for a simple fire alarm system consisting of two input loops (one closed, one open)

Note: This article uses material from the http://intimefire.com